Last week, my friend Patrick Allen wrote about three books he rediscovered in his classroom library.  He shared how he might use them with students in his reading workshop.  After reading his post, I was inspired to take a virtual walk through my classroom library in order to do a similar post.

My library is new.  When I made the decision to move from middle school to third grade, I had to get rid of my YA library (most of which was donated to a group who will get the books into other classroom libraries) and build one appropriate for third graders.  I had a LOT of help.  Friends donated books to the cause.  Others sent me Amazon gift cards to use to purchase books.  The Scholastic Warehouse Sale was a gold mine.  The work was worth it.  The kids are loving the books, which was the goal all along.

Today's edition of From My Stacks will focus on three books that elicited great thinking and discussion among my third graders.

1.  Gleam and Glow by Eve Bunting

Gleam and Glow tells the story of a family forced to leave their home as a result of war.  As the family prepares to flee before the army arrives in their town, the children wonder what will become of the goldfish they've promised to care for.  Eventually, they must leave, and with no other choice, put the goldfish in the pond near their house.  Though this is a story about the war in Bosnia, it has clear connections to the wars happening in the middle east today.

I used this book when showing my students how readers listen to their "inner voices".  My assistant read the story out loud while I modeled being the inner voice (I even held a thought bubble around my head as you can see in the photo), talking about my thinking as the story went on. 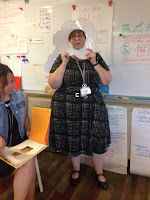 When we discussed the story, the kids really wanted to talk about the family and how they had to flee their home and everything they loved.  They were moved by the hardship the mother and the two kids went through as they tried to get to safety and to find their father.  Few of the students knew about the refugees fleeing Syria and we were able to have an age-appropriate conversation about humanity, compassion, and love.  This lesson turned out to be about way more than reading comprehension.

2.  Miss Paul and the President by Dean Robbins 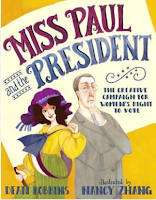 In the lead-up to this year's election, I just couldn't bring the nastiness of the campaign into a classroom where the number one expectation is to treat others the way you want to be treated.  Instead, I chose to focus on the importance of participating in the process.  As a class, we had several discussions on why it is important to cast a ballot, not just in presidential elections, but also in local elections such as those for school board and city council. One of the books I shared was Miss Paul and the President by Dean Robbins.  A picture book biography of Alice Paul, this book shows kids the struggle involved in getting women the right to vote.  Many of my students were surprised to learn that women have been able to vote in federal elections for less than 100 years, and this book became a jumping off point to talk about why women felt they needed a voice in elections and why a vote is important.  The students were very curious about the tactics the National Woman's Party used to convince the people of America, a great deal of whom did not feel women were capable of the complexity of thought to cast a ballot, to ratify the Nineteenth Amendment.

The kids' questions and comments were thoughtful and thought provoking.  They ranged from disbelief that people used to think women were incapable of voting or pursuing a profession such as medicine or law to curiosity over whether or not a single vote matters so much.  I will definitely use this book again, even in a non-election year.

Since the first day of school, I've been working on growth vs. fixed mindset.  It's surprising to me (though it probably shouldn't be) how many of my students come in to third grade believing that they are not good at math or who give up the minute something becomes challenging. When I read Rosie Revere, Engineer as well as the companion books Iggy Peck, Architect and Ada Twist, Scientist, we were able to talk about how the characters responded to the challenges they faced and how the characters didn't give up.  I also love that these books include girls doing traditionally "boy" activities like inventing and doing scientific experiments.
At first, my students responded to the whimsical illustrations by David Roberts, but they were quickly drawn into the story.  They were appalled when Rosie's uncle laughed at her invention, and cheered when Rosie's invention succeeded - if only for a while.  The kids were eager to talk about what Rosie (and Iggy and Ada) learned over the course of the story, and long after the last page turned, these characters continue to come up in classroom discussions.

I have so many more books that my kids have loved.  I have even more that I am excited to share.  My students know that if there is ONE thing I am passionate about, it is books.  They know that most weeks I have at least one or two new books to add to our classroom collection, and that as soon as I get them catalogued and numbered they are free to read them as often as they wish.  I know that my excitement about books NEW and OLD is contagious!

Watch for my next "From my Stacks" edition in January!
Posted by Mindi Rench at 8:31 AM

Check out my other blogs: